Here are a few examples of recipes that we have enjoyed for many years and have become firm family favourites. If you have some two-fruit recipes that you’d like to share with us and other readers, just reply as a comment to this post, or write to us at enquiries@realenglishfruit.co.uk.

8 oz flour
4 oz butter
2 oz sugar
Dice the apples, remove the stones from the plums, and boil them briefly. Drain and place in an oven dish. Mix the flour and butter with your fingers, until it has reached a breadcrumb-like texture. Add the sugar. Spread on top of fruit, and cook in the oven at 180°C, until the topping has reached a pale brown colour. Mmmm, this is really delicious… whether on its own or accompanied by some custard or whipped cream.
Other fruit pairs can be used. For example, apple and pear, plum and peach, apple and apricot…

Variations:
Use 2 oz of porridge oats instead of flour. Chopped nuts can also be used. 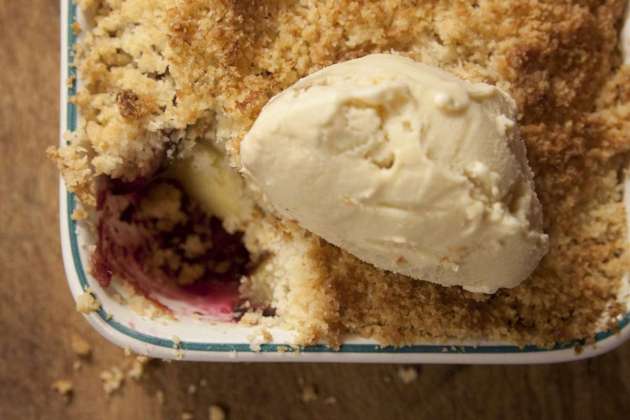 1 quince
4 small apples
Half a pint of cider
3 oz sugar
1 oz butter
This is a great combination of the sweetness of apples and the complex tartness of quince. The recipe was used by the monks of Ampleforth Abbey in York. Peel, core and coarsely grate the fruit. Put the grated quince in a small saucepan, pour in the cider and bring to the boil. Simmer for 10 minutes until tender. Add the apple and simmer for 10 minutes longer. Stir well with a wooden spoon to make a thickish pulp. Add the sugar and cook gently until it has all dissolved. Stir well and add the butter. This sauce goes well with roast pork or goose.

The following recipe is made just with apple and other ingredients, but it’s such a wonderful and simple stuffing that we thought we’d include it.

Mince the celery, apple and carrot. Melt the butter in a saucepan. Remove from heat and add the other ingredients, mixing well. Season well and use to stuff breast of lamb or duck, goose, or the neck end of a turkey.